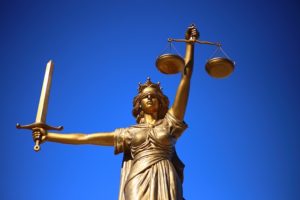 Many courts of law, in various different nations throughout the Western world share a common feature.

That common feature would be a certain statue. A statue of a woman named “Lady Justice.”

Lady Justice may not look exactly the same in every courthouse where you find her.

Some details of her appearance differ according to the differences in how the sculptors who created her, envisioned her in their minds.

But you know it’s her because she almost always carries a sword in one hand, a set of scales in the other, and a blindfold over her eyes.

The sword she wields represents the power of justice to punish wrongdoers.

The scales stand for the weighing of evidence as the means of arriving at a just verdict.

The blindfold over her eyes is a reminder that justice is blind;

judging not according to the status, race or influence of the accused but solely on the truth.

“Lady Justice” represents the noblest vision of how justice should be dispensed.

But it does not always accurately depict the reality of how it is dispensed.

It was far, far from the reality in the trial of Jesus.

Even if you’ve never set foot in a courtroom yourself, we’ve all seen enough movies and TV to know that when witnesses take the stand they are required to swear under oath that they will “tell the truth, the whole truth and nothing but the truth.”

Without some guarantee of truthfulness there can be no assurance that justice has been served, that the guilty parties have been convicted and the innocent exonerated of the charges against them.

Truth is a word that John’s Gospel comes back to again and again.

You hear it in John’s telling of Jesus’ birth.

Which John doesn’t describe through stories of mangers, angels, and shepherds

but by announcing that “the Word became flesh and lived among us,

and we have seen his glory, the glory as of a father’s only son,

full of grace and TRUTH.”

Only in John’s Gospel do we hear Jesus describe himself as the way the TRUTH and the life.

No one among the four Gospel writers except John thought it important to record Jesus’ promise that his disciples will know the TRUTH, and the TRUTH will make them free.

In the course of Jesus’ trial, before a council of religious leaders, it is obvious that the evidence against him is not a true picture of the things he has been doing and saying.

Then, he is brought before the Roman governor of Palestine – Pontius Pilate.

Pilate is a man who possesses a very loose definition of truth.

For Pilate, truth is not an objective reality.

Truth is what you make it. A means to an end.

It is information that is useful to be ignored or manipulated to suit a given purpose and to achieve a desired objective.

Power and self-preservation are the only truth Pilate knows.

Pilate could care less if Jesus was truly guilty of the charges made against him.

He only cared about the possibility that this this whole controversy that swirled around this man Jesus might blow up in his face.

Possibly costing him his position as Governor.

When Jesus and Pilate meet face to face, it is supposed to be Jesus who is on trial and Pilate who is the judge.

But each of them in their own way, know that nothing could be farther from the truth.

Pilate’s future hangs in the balance every bit as much as Jesus’ does.

What is really on trial in that room is Truth itself.

Pilate asks Jesus straight out, “Are you the King of the Jews?”

What he actually asking is, should he consider Jesus a threat or not.

That is the only truth Pilate is interested in knowing.

If Jesus would confess and plead guilty to claiming to be a king, it would be an open and shut case.

As big as the Roman Empire had become, there was still room in it for only one King, and that was the Emperor.

If Jesus claimed to be a king to rival Caesar, that crime carried a mandatory death sentence.

Pilate could wash his hands of it and be done with it.

But, the truth is more complicated than that.

Jesus tells the TRUTH. That he is indeed a king. But at the same time, that his kingdom is not of this world.

Unlike Rome, which had conquered the known world by the might of its armies; Jesus’ kingdom grows through the conquest of human hearts.

He said, “Everyone who belongs to the TRUTH listens to my voice.”

Maybe, if Pilate’s jaded attitude towards truth hadn’t been standing in the way, he might’ve recognized that THE TRUTH Jesus spoke represented a power that not even Imperial Rome and all her legions could withstand.

He might even have surrendered his own heart to this gentle conqueror and switched his allegiance to follow him.

Instead, Pilate dismissively asks. “What is truth?”

That’s where the trail of evidence about truth ends in John’s Gospel.

The last place in John’s Gospel where the word “truth” is found in connection with Jesus is in Pilate’s cynical question.

That question hangs, unanswered in the silence that followed it’s asking.

In some ways, it hangs unanswered still.

In the fifth century B.C., Greek dramatist Aeschylus said, “In war, truth is the first casualty.”

What is true with regard to wars fought with weapons of steel and fire is no less valid when it comes to wars waged with words.

In a world where inconvenient truths are dismissed as fake news and blatant falsehoods are justified as alternative facts, it can seem as if our grip on the Truth is getting weaker every day.

Jesus tells us that he is Truth.

And that everyone who listens to his voice belongs to the truth.

If we want to distinguish truth from fiction, it is by him and his words that we can “fact-check” what we hear.

Where people hear his voice and follow him, they will be led in the right way and not led astray.

Pilate asked, “What is truth?”

And three days after he asked that question, he got his answer when his own soldiers reported that the tomb where Jesus’ body was laid was unsealed and empty.

Jesus’ own disciples asked, “What is truth?” when Mary Magdalene showed up at their door just past dawn with a crazy story of Jesus being raised from the dead.

And they got their answer when the Risen Jesus came to visit them, as well.

The people of Jerusalem asked, “What is truth?” when Holy Spirit filled disciples ran through the streets preaching resurrection and repentance, while their religious leaders accused them of being drunkards.

And before the sun had set on that day, thousands of them got their answer when they were set free by the truth that Peter preached in Jesus’ name.

People still ask today, “What is truth?” while victims’ stories are silenced, and while innocents are portrayed as enemies.

And it is up to the Church to give them their answer by speaking the Truth that can set them free.